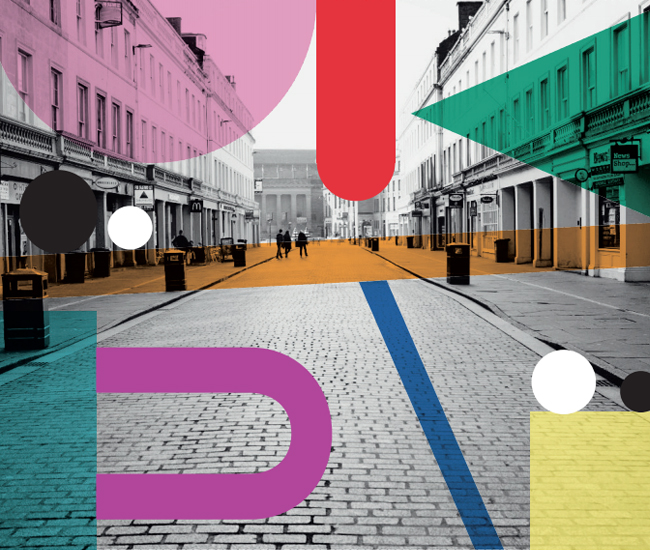 Tradeprint are supporting a local charity initiative to transform a Dundee city street with inspirational design on 29 and 30 September.

For the last weekend in September, local young people will descend on Reform Street in Dundee city centre to temporarily make the street over with inspirational words, designs and images to create a vibrant atmosphere and uplift the community.

Re-Formation: Making it Happen is a Dundee based community art project. Several months in the making, the initiative was co-designed and will be delivered by 10 groups of young people from school and community groups.

The artwork will represent a variety of themes, including equality and diversity, positive feelings, ambition, respect, inclusion and Dundee, as well as challenging stereotypes and reputations of young people.

Tradeprint are excited to take part in such an ambitious project which supports young artists, designers and creatives. We have sponsored one of the ten groups to allow them to take part over the weekend.

“This is a fantastic endeavour which will positively impact on the lives of the young people involved. They have already shown dedication and passion to drive this project forward and we are delighted to support them by sponsoring one of the participating ten teams. As a local Dundee company working with creative professionals, we cannot wait to see the great things these young artists and designers accomplish now and in the future.”
Quote from Rod Scrimgeour, Chief Innovation and Product Officer, Tradeprint

This project has been organised by the Corner as part of the Scottish Government’s Year of Young People 2018. The project is a large-scale, city-wide partnership, celebrating the ideas and achievements of young people. The project aims to promote positive mental health for young people while highlighting relevant services available in the city. The project will inspire and empower young people to contribute positively to their community.

“Supporting young people to leave their mark on Reform Street in such a bold and inspirational way has been our most ambitious project to date.   The themes that young people have chosen gave us a real insight into what they care about most.  The Year of Young People has brought a great opportunity for us to work with partners across the city, to make such an exciting project happen.”
Quote from The Corner

Images courtesy of the Corner.