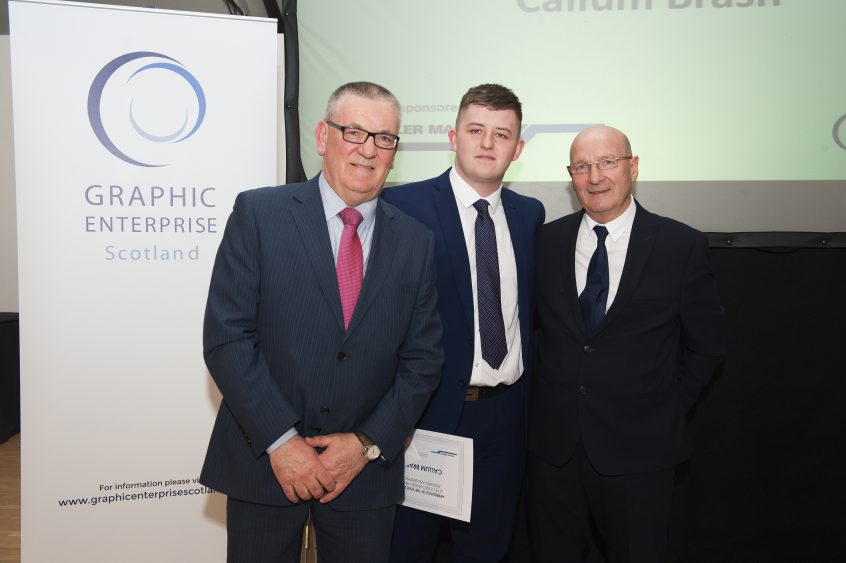 Callum Brash  has been awarded Apprentice of the year by Graphic Enterprise Scotland, under the Level 2 mechanised print finishing and binding category. The ceremony took place at the end of April, and was sponsored by Hewlett Packard and Muller Martini.

Graphic Enterprise Scotland (GES) revived the tradition of apprentice awards in Scotland after they disappeared along with the last printing college course. Jane Rixon, GES director, praised the award ceremony saying: “It was great to see so many young people supported by their friends and family take pride in their achievements. Printing is a real skill and one that we need to support and encourage.”

Callum was only 16 when he started working at Tradeprint (formally Fairprint) as a packer, back in March 2013. In recognition of his hardwork and determination he was offered an apprenticeship 9 months later, and since then has become an integral component to our production team.

This is what Callum Brash had to say when asked about what the award meant to him;

“One of the best moments was when I got my letter saying I was in the final for the apprentice awards [GES]. I felt proud of myself and made me realise that I have a bright future ahead of me.”

“My apprenticeship has had a massive impact on my life. If I didn’t have it I don’t know what I would be doing with myself. I’ve met so many great people both in and out of work by doing it, and winning this award topped it all off.”

“If you are lucky enough to get an apprenticeship you need to just get your head down and do the best you can, especially in this day and age these opportunities don’t come about often, and it can completely transform your life for the better.”