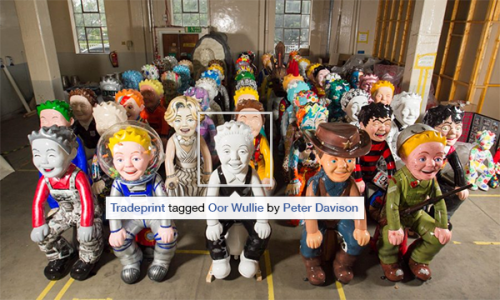 If you’ve been in Dundee at any point over the summer, you may have noticed a familiar face making an appearance. 70 Oor Wullie statues were given to artists across the nation to be painted, sculpted and themed in any way the artist chose.

The Archie Foundation has a big task at hand – they’re looking to raise £2,000,000 for a much needed twin-operating theatre paediatric surgical suite for Tayside Children’s Hospital. So they decided to take inspiration from the “Cow Parade’s”  that have featured around the world. But instead of using the humble cow, they put a Scottish spin on it – using the famous Oor Wullie character to commemorate his 80th anniversary.

Having the statues placed on a trail around Dundee (as well as a select few touring Scotland) helped to attract commerce to the city as well as awareness for the children’s charity.

After a summer of exhibiting, the statues were finally auctioned off on the 13th – raising a total of £883,000 for the cause.

We jumped at the opportunity to help out such a worthy cause – printing the free maps for finding statues across Dundee as well as the auction guides and catalogues. Tradeprint personally sponsored a statue styled by one of the original graphic artists for Oor Wullie, Peter Davidson, which can be seen in the photo above.

It raised the most money of all the statues – being sold for £50,000 to businessman Garreth Wood.

It just goes to show using a novel idea for a worthy cause can help you achieve amazing things – so if you’re hoping to raise money for your own cause, don’t be afraid to think outside the box and get the community involved!

One of our beautifully printed (if we do say so ourselves!) Auction Catalogues